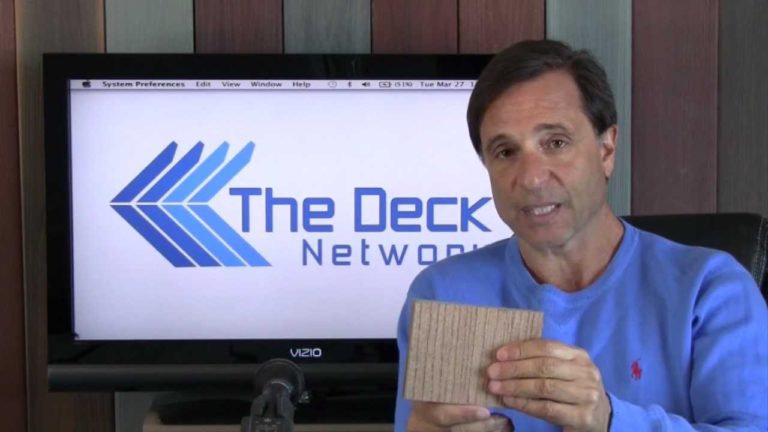 In the early 1980s, pressure-treated decks were coming into their own replacing mahogany, cedar and hardwoods like Ipe. Pressure-treated decks looked well, but they needed to be stained as soon as they sufficiently dried. The decks looked great after they were stained but this maintenance needed to be done every year for the deck to continue to look great. Feedback from customers strongly indicated that making time to stain their deck every year was a chore that never got done. In 1992, Mike continued to build decks but pressure treated decks became problematic. Mike had no other choice but to add a clause in his contracts that the deck needed to be stained within 30 days or they would crack and check. The pigment in the stain would shade the wood thus slowing down the problem. Customers balked at the contract clause, but it needed to be done. Mike knew that a better product was on the way, but it would still take years. Mike went so far as to stop building decks because an unstained deck cracked so badly that it was unfairly seen as a reflection on his workmanship. In 1992, Mike built his first Trex Deck on Cape Cod, Massachusetts where he resided at the time. The Trex decking was offered in brown and gray and within a few months, both colors were the same, gray!

In 1997, Mike researched the decking industry and found a company called United States Plastic Lumber (USPL). This company was selling a high-density polyethylene (HDPE) decking that didn’t have wood in the mix. The USPL decking didn’t fade like the raw composite; it was grooved and was even available in railings! This was a quantum leap forward in technology although there were still problems with expansion & contraction due to temperature fluctuations. There was also static electricity buildup on the deck that during low humidity would give someone a nasty shock.

In 2000, Mike realized that composite decking was evolving with the advent of the colored railing. Mike knew it was time to capitalize on the opportunity. He saw right away that composite decking & railing was a specialty business and not a lumber yard item. The vast amount of different products and colors (stock-keeping units SKUs for short) and the high cost of composite products, lumber yard could never successfully service the products. Mike was looking for a place to start this composite decking and railing business. However, Cape Cod was not the place. It just wasn’t the right market to propel a new business with a new product. Mike’s older sister and husband lived on Long Island New York; they’ve been telling him for years that if he started this business on Long Island coupled with Mike’s work ethic, he would be successful. Twenty years later, the people that said composite decking would always be a lumber yard item never foresaw that lumber yards would never experience the growth that No Maintenance Decks have had. Now they are kicking themselves for not converting to just composite decking and railing. As they say, the rest is history